Ireland, PNG and Oman to join Sri Lanka in Geelong

The fixture and match-ups for the ICC Men’s T20 World Cup 2020 in Australia have been finalised, following the completion of the Qualifier event in the UAE.

Papua New Guinea, Ireland and Oman will join Sri Lanka in Group A of the first round, with the four teams embarking on a round-robin competition at Kardinia Park from October 18-22. The opening match of the ICC Men’s T20 World Cup 2020 will be played between Sri Lanka and Ireland at the Stadium.

For Papua New Guinea, runners-up at the Qualifier in the UAE, it will be their first ever major global cricket event at senior level after narrowly missing qualification to the 2104 and 2016 ICC T20 World Cup tournaments. They are coached by Australian Joe Dawes, who played over 100 state games for Queensland.

Tickets to all matches are on sale now at t20worldcup.com, from $5 for children and from $20 for adults across both tournaments. 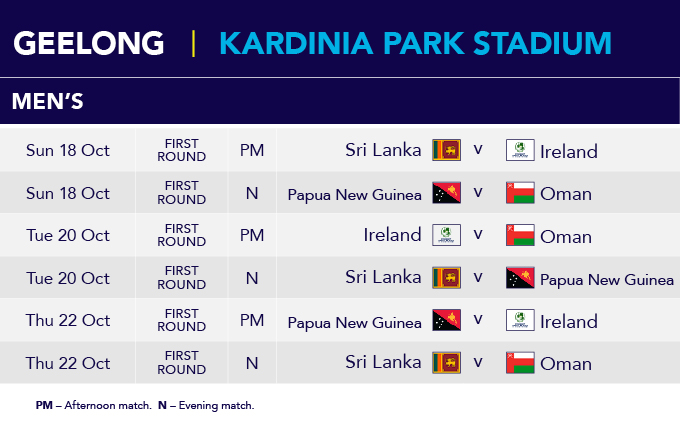